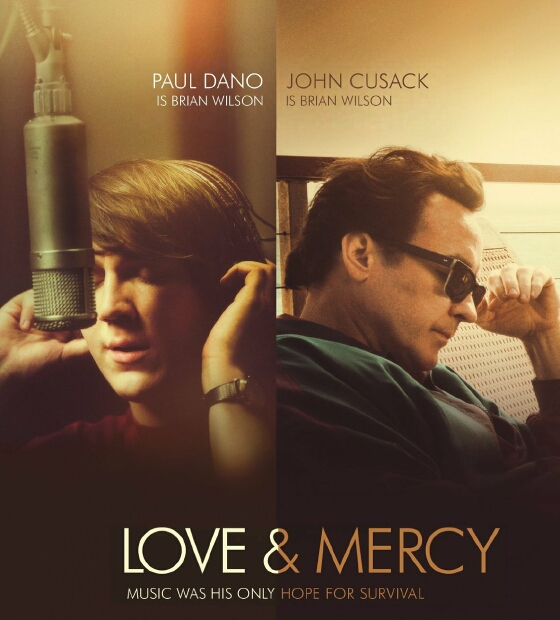 This is a film about the musician Brian Wilson, told in parallel in two phases, his life in the 1960's and his life in the 1980's. The dates are never explicitly stated, but it seems like the main periods dealt with by the film are 1964 to 1966 and 1986 to 1988. Brian Wilson is played by two different actors, Paul Dano as Brian Wison in his early twenties and John Cusack as Brian Wilson in his late forties. Before I saw the film I thought that using different actors would detract from the realism, but it works very well. People's appearances do change over a period of time. I know that from my own experience. In my early childhood I had white hair, in my late teens my hair was yellowy blond, in my thirties my hair was dark blond, almost brown, and now I shave my head to hide the size of my bald patch.

The film opens with the Beach Boys already at the height of their fame. It was a family group: Brian Wilson, his brothers Dennis and Carl, a cousin and a childhood friend. From the beginning Brian was the driving force. He wrote the songs and the Beach Boys performed them. On stage Carl Wilson was the more dominant personality. This was just as well, because Brian said that live performances were too stressing for him, and he decided to stay at home while the group was touring. His strength lay in creating new songs in the studio, not in performing them on stage.

Brian's time away from the band allowed him to record "Pet Sounds" with session musicians. This was released as a Beach Boys album, but it was effectively Brian Wilson's first solo album, since the other band members added almost nothing to it, musically or vocally. Surprisingly, it was their least successful album. I say "surprisingly", because I'm used to it being regarded as their best album. I don't understand why it took so long to become popular. Maybe it's because the American public associated the Beach Boys with surfing music, and "Pet Sounds" was too different for them to accept straight away.

Behind closed doors not everything was so positive. Brian Wilson heard voices in his head, which was made even worse when he experimented with LSD and other drugs. His father, who had produced the band's first few albums, hated Brian's new music and said so in unpleasant ways.

In the 1980's we see Brian Wilson under the control of Dr. Eugene Landy, a domineering psychiatrist who lived with Brian and had taken complete control of his life. Dr. Landy's treatment had made Brian active again after a period of three years spent in bed, but as we see, he wasn't happy. People who know about Brian Wilson probably know what happened next, but I shan't say any more to leave it as a surprise for those who still haven't seen the film. 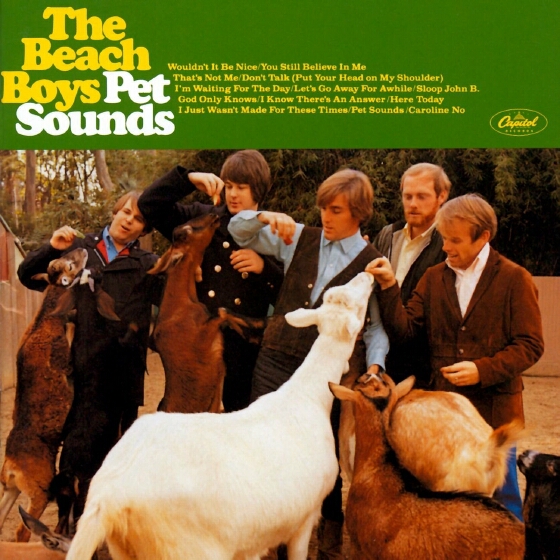 This is an incredible film, whether or not you consider yourself a Beach Boys fan. The atmosphere of the past decades is perfectly recreated, the happy 60's and the dismal 80's. It feels like we're living in the past. Both actors who play Brian Wilson give first class performances, but in my opinion it's Paul Dano who stands out. The film has been tipped as a contender for the Best Film at next year's Academy Awards, and I can see why.

The real life Brian Wilson, who is now 73, has praised the film for its accuracy, especially in the portrayal of his mental illness in the 1960's. Compare this with other biopics like "Foxcatcher", which Mark Schultz criticised for its inaccuracy. For some of the scenes the original locations were used, such as the recording studios which the Beach Boys actually used. Paul Giamatti bases his portrayal of Dr. Eugene Landy on surviving film footage of the eccentric doctor, both his speech patterns and his mannerisms. "Love & Mercy" is more than a piece of entertainment, it's a respectful tribute to Brian Wilson's life. 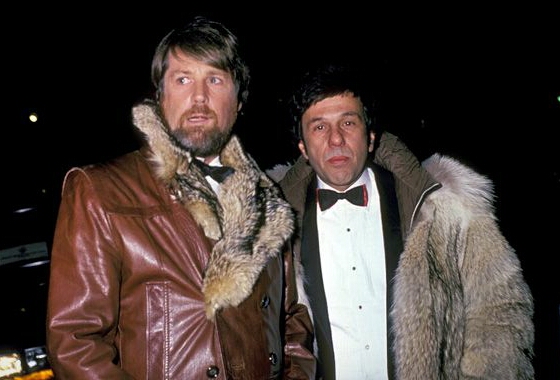 I'd like to add a few personal thoughts, based on my impression of Dr. Eugene Landy, pictured above with Brian Wilson (the real people, not the actors). Mental illnesses do exist, and psychiatrists are necessary to treat them, but in my opinion there should be more stringent controls on what psychiatrists are doing. It's true that Dr. Landy was an extreme case, but it happens more often than people think. I too spent 17 months in the hands of an abusive psychiatrist, Dr. Jeremy Kenney-Herbert.

My closer friends already know about this, but I'll give some brief details here. In 2000 I was suffering from depression.after a relationship break-up. I was caught up in a vicious circle. The depression caused me to lose my job, and I was refused unemployment benefits, so I ended up sleeping on the streets, which made me even more depressed. An Anglican priest advised me to commit a small crime, because being in prison would give me free food and board. I couldn't do this, because I have a natural aversion to breaking the law.

One day I witnessed a man committing a violent assault. I saw a chance to be arrested without committing a crime. When the police came I confessed to the assault and they arrested me. Unfortunately, I'm not a very good liar. After three hours of questioning they were convinced it wasn't me and sent me back onto the streets. I kept up my story in the hope that I would be re-arrested, but it never happened. After telling my story to a G.P. I visited, Dr. Benn in Ladywood, I was referred to Dr. Kenney-Herbert, and I was admitted to a mental hospital. That was fantastic. A comfortable room, three meals a day and nice people to talk to.

The first 10 days were okay. Then I was transferred to another hospital, and the worst time of my life began. Imagine the situation. There were 12 patients on the ward. 11 of them were young (under 35), black and violent. Then there was me. They noticed straight away that I didn't fit in. A rumour spread that I was an undercover policeman, and I was frequently beat up. I don't blame Dr. Kenney-Herbert for considering me to be violent when he first met me. After all, that was what I told him. But after my admittance into hospital he requested details about me from the police. He read the police report, but nobody else in the hospital ever saw it, because it was "lost". It's obvious that after reading the report he realised his mistake, but rather than admitting to it he tried to cover it up. I stuck to my story for two weeks after my admittance into hospital. (After my initial arrest and release I was put on bail for 7 weeks, so I continued to claim to be guilty for this time. After the 7 weeks were over I admitted that I had lied about it).

I had difficulty making out Dr. Kenny-Herbert's motives. At first I thought he was incompetent in the way he treated me, but as time progressed I realised he was malicious. He wanted me to be attacked by the other patients, hoping that I would retaliate, because that would prove to everyone that I was violent. After months of mistreatment without retaliation he tried a different tactic. He claimed that the only reason I got into so many fights was because I was attacking the other patients first.

It was obvious that Dr. Kenney-Herbert wanted to keep me locked up for the rest of my life. He might have succeeded, if I hadn't been extremely lucky. He was transferred temporarily for six months. The psychiatrist who replaced him, Dr. Russell, read my files and immediately noticed something was wrong. He interviewed me at length two days in a row. At the end of the second interview he asked me, "Do you know why you're in this hospital?" I replied "No", to which he answered, "Neither do I. Let's see about getting you out as quickly as possible".

So it isn't just Dr. Eugene Landy. Other psychiatrists such as Dr. Jeremy Kenney-Herbert can be just as malicious, doing everything they can to harm the patients in their care. This is wrong. I was helpless. I was vulnerable. I was suffering from depression and unable to defend myself. In fact, all my time in hospital I never received any treatment for depression. If anything, my state of mind deteriorated while I was in hospital, and I didn't start to recover until I was released.