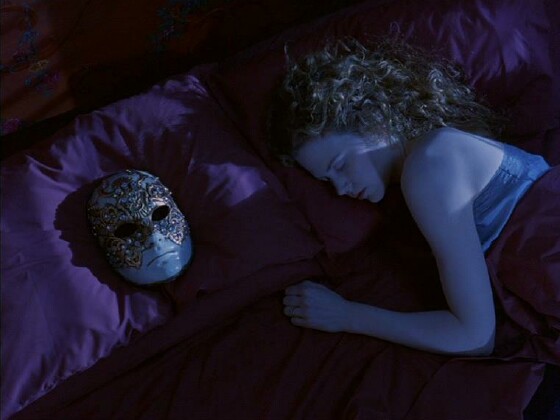 "No dream is ever just a dream".

This is the eighth film starring Leelee Sobieski. It was released in 1999, but she was still 14 when she appeared in the film because her scenes were filmed in early 1998. The film was shot over a period of 400 days and still holds the world record for the longest uninterrupted period of film shooting. That must have been a gruelling experience for the film crew and for Tom Cruise, who appeared in most of the scenes.

Despite being set in New York, the film was made in England. The Greenwich Village street scenes were painstakingly recreated in Pinewood Studios, including the accurate placement of items such as newspaper vendors. It was so accurate that anyone who lived in New York in 1999 and saw the film wouldn't be able to tell that it was only a film set. 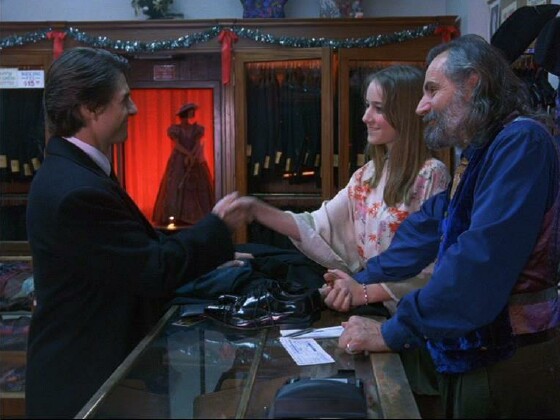 Leelee Sobieski only appears for a few minutes in the film, as the promiscuous daughter of the costume shop owner Milich. This is the first of two films in which she co-stars with the prolific Croatian actor Rade Serbedzija. The other is "The Elder Son", made in 2006. In both films he plays her father. 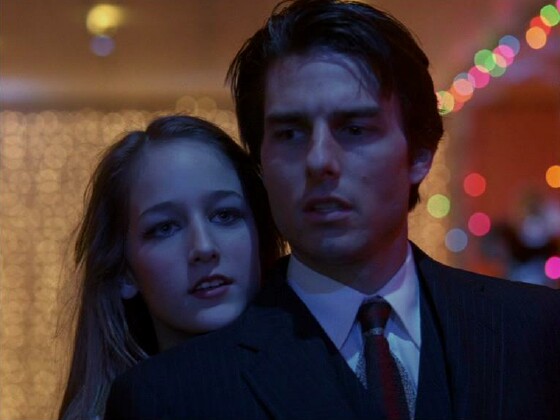 The film is an adaptation of the 1926 book "Dream Story" by Arthur Schnitzler. The original story is set in Vienna, one of the world's most elegant but decadent cities at the time. I agree that New York City is a more appropriate setting if the story were to happen today. It's a city of contrasts. Dr. Bill Harford is a rich doctor who lives in a wealthy apartment and goes to luxurious dinner parties. The rest of the world lives in poverty, such as the prostitute Domino. When Bill enters her apartment he's speechless, he's never seen such squalor. After this he spends his time wandering the streets as if sleep-walking, stumbling from one situation to another. The highlight is when he gatecrashes the meeting of a religious cult where the members are practising free sex.

Is it real? Is it fake? At the end of the film many questions are left unanswered. Stanley Kubrick liked to leave ambiguity in his films. In the case of "Eyes Wide Shut" it's appropriate. When you're dreaming everything seems real. When you wake up and remember the dream you see contradictions that weren't apparent while you were asleep. What's real for a moment is fake afterwards. 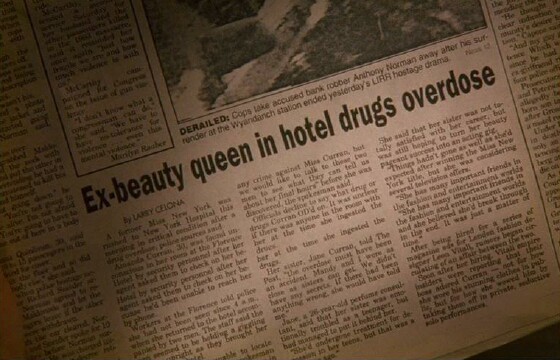 There's a scene in which Tom Cruise reads a newspaper article about the death of a woman he recently met. The article is written in great detail. Unfortunately some of the lines are doubled. In the first column it's the 7th and 8th lines, in the second and third columns it's the 9th and 10th lines. You can click on the picture above to check for yourself. Sloppy.

Here's a full transcript of the article, not visible in the above screenshot:

A former Miss New York was rushed to New York Hospital this morning in critical condition after a drug overdose, police sources said.

Amanda Curran, 30, was found unconscious in her room at the Florence Hotel by security personnel after her agent asked them to check on her because he'd been unable to reach her by phone.

Workers at the Florence told police she had not been seen since 4 a.m. when she returned to the hotel accompanied by two men. The staff said the men seemed to be holding a giggling Curran upright as they brought her into the posh hotel.

Police have been unable to locate the two men, but a police spokesman said they did not suspect foul play in Curran's overdose.

"We don't believe there has been any crime against Miss Curran, but we would like to talk to those two men to see what they can tell us about her final hours before she was discovered", the spokesman said.

Officials decline to say what drug or drugs Curran OD'd on. It was unclear if there was anyone in the room with her at the time she ingested the drugs.

Her sister, Jane Curran, told The Post, "The overdose must have been an accident. Mandy and I were as close as sisters can get. If there had been anything wrong, she would have told me".

Jane, a 26-year-old perfume consultant, said that her sister was emotionally troubled as a teenager, but she managed to put it behind her.

"She'd undergone treatment for depression in her teens, but that was a long time ago".

She said that her sister was not totally satisfied with her career, but was still hoping to turn her beauty pageant success into an acting gig.

"Things hadn't gone as well as she'd expected after winning the Miss New York title, but she was considering several television offers.

"She has many important friends in the fashion and entertainment worlds and she believed she'd break through in the end. It was just a matter of time".

After being hired for a series of magazine ads for London fashion designer Leon Vitali, rumors began circulating of an affair between the two.

Soon after her hiring, Vitali empire insiders were reporting that their boss admired Curran -- not for how she wore his stunning clothes in public, but by how she wowed him by taking them off in private, seductive solo performances.