This is a another film from Retromedia's prolific director, Dean McKendrick. That makes 17 films that he's directed in four years. At some point I need to do a marathon of his films, even though I've already reviewed them all on this blog.

This year he has made three films. I can't be sure of the exact release order until I'm holding all three discs in my hand, but "Love Machine" was made after "Model for Murder", which I reviewed a few days ago. Both films are produced by Sal V. Miers, who seems to be growing in importance at Retromedia. I'm waiting for an interview with him so I can find out what's going on behind the scenes. Whenever I ask Fred any questions in Facebook his replies are short and cryptic.

The film is about three young couples where the wife is suffering from a lack of interest in sex. They visit a psychologist called Dr. Bradshaw, who has developed a machine to cure sexual frigidity. Unfortunately the machine has a side effect. The women have an urge to kill their husbands during sex. This supposedly abnormal behaviour isn't totally unheard of. The praying mantis is notorious for eating her mate during copulation, his loins still jerking even after his death. Similar conduct is found among spiders who eat their mates immediately after sex, at least allowing them pleasure before killing them.

Technically speaking, is it correct to call Dr. Bradshaw a psychologist? A psychologist would never use a machine for therapy. Machines are more likely to be used by psychiatrists or psychotherapists.

Strangely, two scenes are used from previous films. We see Beverly Lynne and Randy Spears making love in a scene re-used from the "Tanya X" mini-series, and there's a shower scene with Christine Nguyen lifted from "Sexual Witchcraft". Why? Was the casting director Scott Webster off sick, so three actors were missing? Did the budget run out before everyone could be hired? Or did they just do it because they thought nobody would notice? I noticed immediately. However, the scenes are re-edited since the original films, and I confess to being a huge fan of Christine Nguyen, so the re-use of the scenes wasn't unpleasant.

I greatly enjoy this film, but I'm biased. I like any films where women kill men. 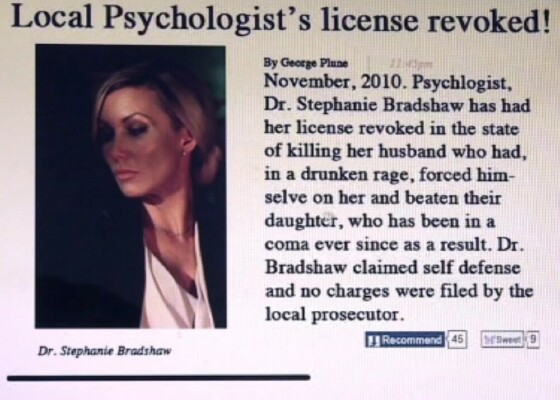 There's an online news report about Dr. Bradshaw that we see on a computer. The author obviously didn't use a spell checker. He's made two mistakes in 11 lines of text ("psychlogist" and "himselve"). If you think that it sounds funny to say that her license was revoked in the state of killing her husband, you're absolutely right. When the text is read aloud the man inserts an extra five words that must have magically appeared before his eyes. The full sentence reads:

"Psychologist Dr. Stephanie Bradshaw has had her license revoked in the state of Colorado after attacking and nearly killing her husband who had, in a drunken rage, forced himself on her and beaten their daughter, who has been in a coma ever since as a result".

Click here for another review by someone who didn't enjoy the film as much as me.