The Death of Stalin (5 Stars) 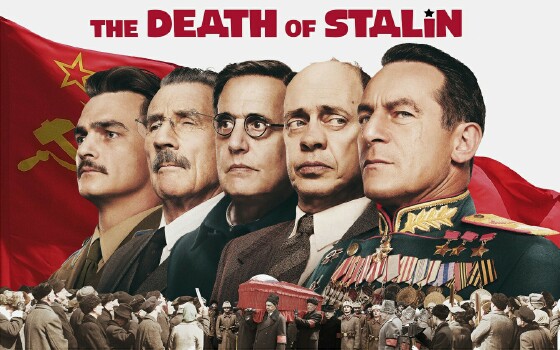 I had to wait a long time. This film was released in British cinemas last October, and my friends were telling me how good it was, some even calling it the best film of the year. It took a whole six months to find its way into German cinemas, much longer than the usual two to four week delay. The cinema was packed, even though it was shown in English.

The film is about the death of the Russian dictator Joseph Stalin in 1953. It's always a catastrophe when a country's leader dies, but it's even worse when a dictator dies, because the whole government is built around his person. Added to this is the problem that it's more common for the leader of a dictatorship to die than the leader of a democracy, because in democracies the leaders usually resign from office when they get older. Dictators cling to power until their last breath.

"The Death of Stalin" keeps close to the historical facts, but it makes fun of them for the purpose of humour. A typical joke is that when Stalin collapses they can't call a doctor because Stalin has had all the doctors in Moscow executed. While it's certainly not true that Stalin killed all the doctors in Moscow, the satirical humour is obvious. Stalin was the most evil ruler ever in Russia, totally paranoid in his efforts to cling to power. It's estimated that he killed at least 10 million Russians, maybe as many as 50 million, making him a bigger murderer than Adolf Hitler.

This film has been banned in Russia because it insults their former glorious leader. The Russian government claims it's a propaganda film made by the British government. That's typical. Dictatorships don't understand that in democratic countries the government has nothing to do with making films.

It should be noted, if this film had been made any time between 1959 and 1999 it wouldn't have been banned in Russia. Shortly after his death Stalin was denounced as a tyrant by his successor, Nikita Khrushchev. For at least 40 years he was considered an enemy of the Russian people. This changed when Vladimir Putin came to power. Putin admires Stalin and has made him a hero in the eyes of the Russian people. Putin sees himself as a new Stalin, a strong man who can wage war and kill millions.

The film is excellent. The cinema audience was laughing loud throughout. On screen people were shooting one another in the chaotic aftermath of Stalin's death, and it was hilarious. I already know that this will be one of my top 10 films of 2018.


P.S. Before I left the house my son-in-law said that it's wrong to go to the cinema on Easter Monday. People should stay at home. Maybe he's more Christian than I am and knows a Bible verse that I haven't read yet.