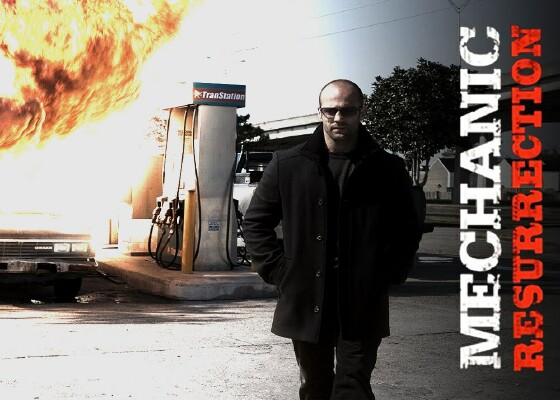 Arthur Bishop is a highly skilled hitman. His speciality is to kill people and make the death look like an accident. At the end of the previous film he faked his own death in order to retire. He's now living in Brazil with a fake name. However, a childhood friend of his, Riah Crain, who is now an international arms dealer, knows that Bishop would never be killed so easily, and manages to track him down to hire him for a job. Crain wants Bishop to kill his three biggest rivals in the arms trade. Killing bad people isn't such a bad thing, is it? But Bishop really takes his retirement seriously, so he changes his name again and moves to Thailand. Crain is persistent. He kidnaps Bishop's girlfriend to blackmail him into working for him. It's not a smart move to make an enemy of the world's best killer-for-hire.

This is a sequel to the "The Mechanic", made in 2011. I haven't seen it yet, but I was excited by two things. "Mechanic: Resurrection" stars Michelle Yeoh, one of my favourite actresses. It's also the first film made in English by Dennis Gansel, one of my favourite directors.

Unfortunately, Michelle Yeoh only plays a very small part, ten minutes at the beginning and two minutes at the end. I was also disappointed to see that the film is very untypical for Dennis Gansel. I know him for deeply provoking melodramas, such as "Napola", "The Wave" and "We are the night", but this film is a rather shallow action thriller. I wouldn't have recognised "Mechanic: Resurrection" as his work if I didn't already know he was the director. I can only suppose that he was working under severe restraints, with a screenplay that he wasn't allowed to change. Jason Statham isn't known for playing roles with feeling, he's an action star, but even he seemed flatter than usual, let down by a poor script. The film is merely a series of vignettes, exciting by themselves, but held together by the thinnest of plots.