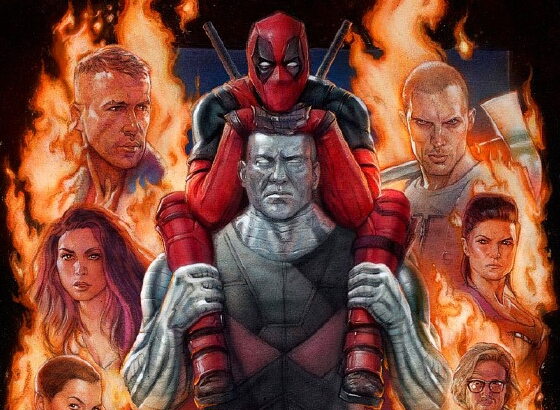 For months this has been touted as an R-Rated superhero movie, the American equivalent of what we call an X-rated film in England. However, in England it only has a 15 certificate, since bad language and crude jokes aren't judged as inappropriate as they are in the USA. Maybe they should have added more explicit violence and nudity to get the rating they were aiming for. Or maybe the jokes should have been even cruder. In an interview Ryan Reynolds, the leading actor, stated that a lot of racist jokes had been cut, and he said that he wasn't even allowed to tell us what they were.

For me the supposedly adult nature of the film wasn't an issue. The constant humorous banter of Deadpool reminded me of the way Spider-Man and the pre-Frank Miller Daredevil used to constantly joke when they were facing villains. Maybe their jokes weren't as crude, but the style was similar. In fact, I would say that no other film has captured the style of comic books as much as "Deadpool".

I'll refrain from summarising the film's plot in this review. I'll just point out that there are three superheroes in the film: Deadpool, Colossus and Negasonic Teenage Warhead. Let's take them in the chronological order of their appearance in Marvel's comics.

Colossus first appeared in Giant-Sized X-Men #1 in 1975. He's a Russian mutant who has the power to transform his body into metal. It looks like steel, but as far as I can remember the exact metal wasn't specified. Despite his great strength, he was always a background character in the X-Men comics, for the following 10 years at least. The story arcs were about Cyclops, Jean Grey, Wolverine, Kitty Pryde and Rogue. I don't think the writers knew what to do with Colossus, and his character was never fleshed out.

Deadpool first appeared in New Mutants #98 in 1991. That was a comic that I didn't read on a regular basis. I can't remember when I first encountered Deadpool in a comic. I only remember that he was a villain who had been given his super powers by the same organisation that had experimented on Wolverine. He later became a superhero, or rather an anti-hero, a man who had no qualms about killing his enemies.

Negasonic Teenage Warhead first appeared in New X-Men #115 in 2001. By that time I had given up reading Marvel comics altogether, so I know nothing about her. I just know that she has a really cool name.

Stan "The Man" Lee does a brief cameo as a DJ. That's interesting. Originally he only did cameos in the films of characters that he created himself, but even since "Guardians of the Galaxy" he's been appearing in all Marvel films. Not that I'm complaining. I'm always glad to see him.