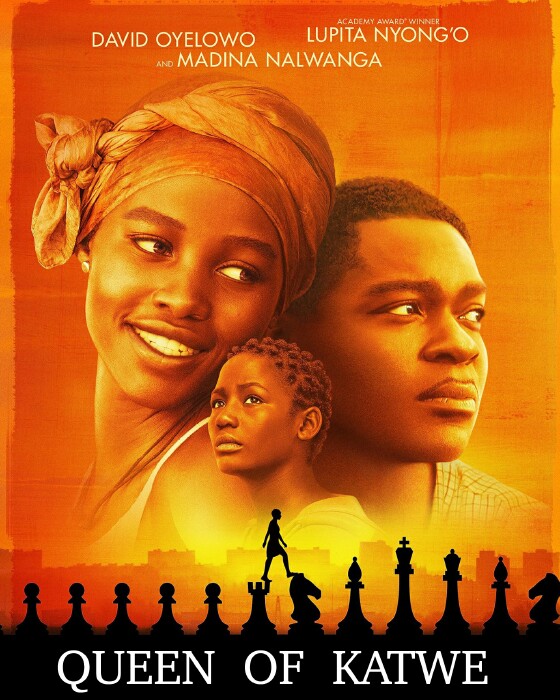 Better late than never. This film was released in September 2016 in America, in October 2016 in England, but I had to wait until this week to see it in a German cinema. It's a marvellous, magical true story about the success of an underdog. The film was made by Disney studios, and in Germany it was advertised as a children's film, but that's a mislabelling. Just because a film is about a young teenager it doesn't mean it's a film for children. It's a film that can be enjoyed by people of any age.

The film tells the story of Phiona Matesi, a young woman who was born in 1996 in Katwe, a slum on the outskirts of Uganda's capital Kampala. The film begins in 2006 when she was 10. She's the second youngest of four children, and she works selling corn. School? What's that? Slum children don't go to school. Her family lives in a small hut. Her father has died of AIDS. Phiona is being prepared for her marriage in a few years time, as soon as she develops into womanhood. There are actually men already interested in her, but her mother won't allow her to be with them until she's at least 13.

Phiona decides to visit a missionary centre in the slum. It gives children a bowl of porridge, and they're taught to play either football or chess. Phiona has a natural talent for chess. In less than a year she becomes the missionary centre's chess championship. The boys are so ashamed of being beaten by a girl, but Phiona considers it natural. She thinks of chess as a girls' game because the Queen is the most powerful piece.

The film follows her life, her advances and her setbacks, up to 2012. She won a championship at a grammar school in Kampala, beating boys years older than herself. She won the African junior championship in Sudan. This is followed by an international tournament in Russia in which she finished in second place, an admirable achievement, but so disappointing to her that she almost gave up chess.

In 2010 she entered a school. According to the what-happened-next text at the end of the film she's now at university.

For me this is a wonderful film about how a girl can succeed in life, even though everything is against her. She fought her way to the top using her natural intelligence and her determination. She's only 20 today, so I suspect that the fight isn't over yet.

It's very unusual for a film to tell the life story of a person who is only 20. This made it possible for the actors and the real life characters they're portraying to be shown side by side at the beginning of the credits. Not just Phiona, also her mother, her sister and brothers, and all the other people important in her life.

Madina Nalwanga, the actress who played Phiona, was 16 at the time the film was made. Normally two different actresses would be used for playing a character from the ages of 10 to 16, but it works out well. Through careful filming, make up and camera angles Madina seems younger than her real age in the first half of the film. 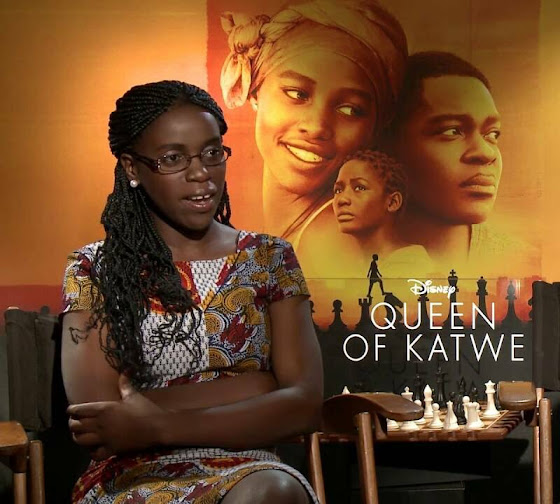 Phiona Mutesi in 2016 discussing the film. 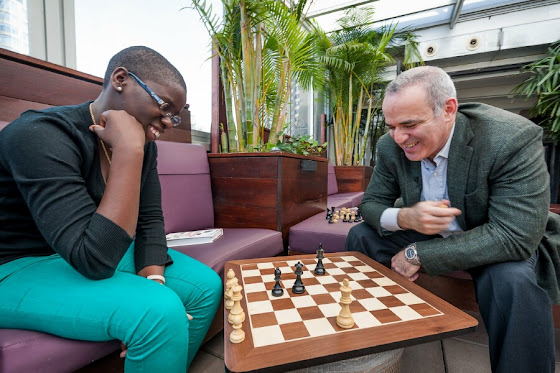 Phiona in 2013 having fun on the chessboard with the ex-world champion Gary Kasparov.