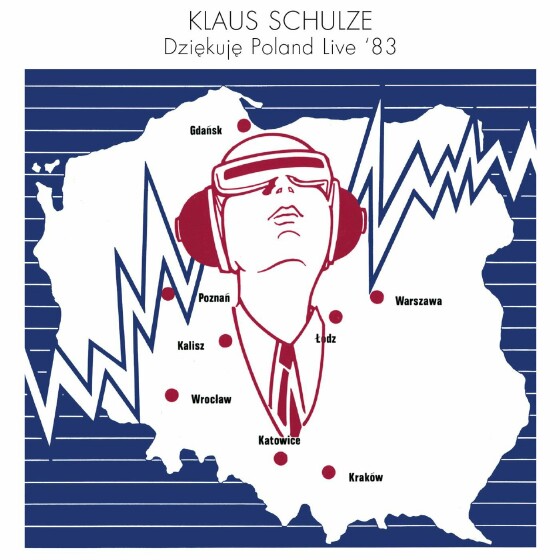 This is the 16th solo album recorded by Klaus Schulze, recorded live in Krakow, Poland on 1st July 1983. This was the first concert of a 10-day Polish tour. The first four tracks are given the names of Polish cities, giving the false impression that they were recorded on different dates.

The second bonus track, "Dzien Dobryl", was recorded in Danzig (Gdansk) on 10th July 1983. The first bonus track, "The Midas Hip Hop Touch", is a studio recording from the early 1980's. Usually Klaus Schulze's publisher picked suitable bonus tracks for the CD re-releases, but in this case he's failed. It sounds out of place on the album.

Once again, a Klaus Schulze live album. I know that I said at the time of my first live album in 1989 that that was it, I wouldn't do another one, but "Poland Live" was unavoidable. Why?

Well, up until summer 1983 I had not played in Poland, so I took a digital recorder along to record the concerts as a personal memento.

Whilst on tour in Poland, we were utterly taken aback by the live atmosphere, by the concerts and by the Poles themselves. The vibes were great, the audiences throughout the tour were really into the music, and this positive energy charged Rainer Bloss and myself to such a degree that we played some of our best concerts in Poland.

Listening to the tapes back at home in my studio I decided that we had to release a "Poland Live" album. The tapes, the music, the audiences, the feel and the energy were too good to waste.

So here it is: "Dziekuje Poland" (Thank you, Poland)!


Here's something that might amuse you. When the album was released in 1983, I had no idea how to pronounce the word "Dziekuje". I didn't have any Polish friends and there was no Internet for me to do research. I discussed it with a few English friends, and we decided to pronounce it "Jucky", which rhymes with "Chucky". For years I referred to the album as "Jucky Poland". I now know better – click here for the correct pronunciation – but for me the album will always be "Jucky Poland".

I need to add a few words about my ratings for this album. The first four tracks (Katowice, Warsaw, Lodz and Gdansk) are all brilliant.The fifth track (Dziekuje) is just noise at the end of a concert while Klaus is thanking his crew. If I'd been standing in the concert hall I would have been carried away by the atmosphere, but sitting at home listening to it, it just sounds stupid. I've chosen to ignore it, because if I'd included it in my ratings it would have dragged the average down.

As for the bonus tracks, I award "The Hip Hop Midas Touch" 2 Stars and "Dzien Dobryl" 5 stars, an average 3½ Stars.